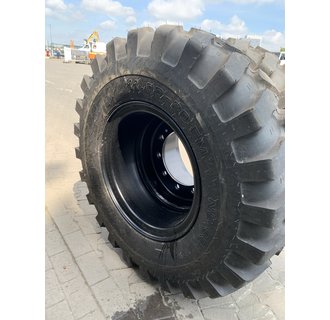 The history of the Mitas brand goes back to the 1930s, when tires were first produced in Prague, Zlín and then also in Otrokovice. In 2016 Mitas became part of the Trelleborg group. Today, tires of the Mitas brand are manufactured in production plants in three European countries and in one production plant in America. The newest European production company in Otrokovice started operating in 2013. Radial tires are produced that are intended for the most powerful agricultural machines. Another important milestone was the opening of a manufacturing facility in the US, which started production of Mitas radial and agricultural tires in 2012. The manufacturing facility is located directly at the heart of the American agricultural industry and in an area home to many agricultural equipment manufacturers. The immense American market with high demands offers the Mitas brand a strong potential.

In the past, Mitas was mainly oriented towards the European market, because of first equipment products, primarily destined for Europe. Today, Mitas is distributed all over the world, through Trelleborg Wheel Systems' global sales network.

A significant part of the production of Mitas radial agricultural tires for new tractors and threshers goes directly to the factories of major agricultural equipment manufacturers such as John Deere, Case New Holland, Claas and AGCO.

Quality and reliability are the driving force behind the Mitas brand. We meet the needs of our customers as much as possible and help them keep pace with the dynamic world of agriculture.

The Trelleborg group, of which Mitas is a member, has annual sales of approximately SEK 32 billion (Eur 3.28 billion, USD 3.69 billion) and is represented in approximately 50 countries. The group consists of five divisions: Trelleborg Coated Systems, Trelleborg Industrial Solutions, Trelleborg Offshore & Construction, Trelleborg Sealing Solutions and Trelleborg Wheel Systems. Shares of Trelleborg have been listed on the Stockholm Stock Exchange since 1964 and listed in the Nasdaq, Large Cap